Kerry Rape & Sexual Abuse Centre and ADAPT Kerry Women’s Refuge and Support Service have joined forces with the National Collective of Community Based Women’s Networks in South Kerry to highlight the 16 Days of Action for the elimination of violence against women and children.
The 16 Days of Action Campaign is an important opportunity to raise awareness and call for changes at an international, national and local level to make women and children safe from abuse.
The campaign runs from 25th November (UN Day For the Elimination of Violence against Women) to 10th December 2019 (International Human Rights Day).
#ShareOneThing is an innovative Social Media Campaign we developed here in Kerry and is running from the 25th November to the 10th December. This Campaign asks you to support victims of domestic and sexual violence by sharing posts, posters and information over the 16 Days of Action.
Catherine Casey (Manager Adapt Kerry Women’s Refuge) & Vera O’Leary (Manager Kerry Rape & Sexual Abuse Centre) who have over 25 years experiences of working with and supporting victims of domestic and sexual abuse believe that raising awareness of the issues facing victims and supporters is vital to tackling violence against women and children.

Communities, agencies & individuals can respond and assist victims by supporting this campaign and circulating information on the services here locally. You can support by following us on social media and sharing our daily messages during the 16 days. 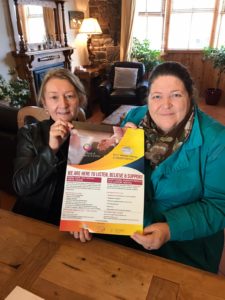 Tweet
Menu ✖
We use cookies to ensure that we give you the best experience on our website. If you continue to use this site we will assume that you are happy with it.OkNoRead more
Revoke Cookies